NEW Translation of MS I.33

I haven’t posted much for a long time, and life had me very busy with non-HEMA things, but I have completed something that I’ve wanted to do for a long time: A new translation of MS I.33. I will copy from the foreword of my work: END_OF_DOCUMENT_TOKEN_TO_BE_REPLACED

This is an article that really should have been written a long time ago.

It’s a basic concept in I.33, and really illustrates the depth of the binding mechanics as well as the tactics used to enter a fight. I will discuss how Halfshield and Longpoint are both similar in their use as Sieges, they are crucially different in one specific way, and it’s an important distinction to be aware of when using Halfshield yourself to ensure it is effective.

END_OF_DOCUMENT_TOKEN_TO_BE_REPLACED

Fake It ’til You Make It

I thought of this in the car yesterday, and it’s something I’ve noticed for a long time. It has to do with how new practitioners are able to mimic what their instructor is showing them, even down to the finest detail. It’s something that I’ve never heard anyone else point out or mention or advise to new practitioners, yet I found it was extremely helpful to myself when I first picked up a sword. END_OF_DOCUMENT_TOKEN_TO_BE_REPLACED

I’ve decided to post about my approach to interpreting the sources, and some basic principles I try to follow. I’ll break it down into some simple rules to follow END_OF_DOCUMENT_TOKEN_TO_BE_REPLACED

A short video filmed this past Saturday finally showing my interpretation of the Schutzen done from Priest’s Special Langort against 4th Ward, and the ensuing binding actions.

More work will hopefully be done with this. Thanks to Sam Nankivell for his help showing the interpretation on video as well as for contributing heavily to this interpretation, particularly to the final “aha” moment when it clicked.

The Final Series of Plays of I.33

The final plays of I.33 have represented a conundrum to me for a while now. While superficially simple, we are shown the various things that happen when Priest’s Special Langort besieged 4th Ward. But then we see the extremely strange anomaly of 4th Ward using an Obsessio (Halfshield) against another Obsessio (PSL). Throughout the rest of the manual, the constant format of the plays is we see one fencer in a Ward, the opponent uses an Obsessio, and then we see either one fencer get struck, or a bind occurs. We don’t ever see this case of Obsessios being used to counter each other elsewhere in the manual. Often, this example is used to support the idea of moving from Ward to Ward in a fight. END_OF_DOCUMENT_TOKEN_TO_BE_REPLACED

Some thoughts on the Schutzen

Some thoughts on the various Schutzen:

Remember, in I.33 we are shown one fencer attacking from a Ward, the other entering with a Schutzen. The one in the Ward is then typically shown doing the correct thing which is to not carry out his strike but to bind against the Schutzen. END_OF_DOCUMENT_TOKEN_TO_BE_REPLACED

An Example of how the 7 Wards of I.33 are Different from the Guards in other Systems

Illustration of Dussack Guards from Meyer’s fechtbuch beside Folio 1r of MS.I.33 showing the first 4 Wards

Today on the bus I decided to read through Roger Norling’s brief intro/summary of Meyer’s Dussack again (found here: http://www.hroarr.com/wp-content/uploads/downloads/2014/10/Norling-Roger-Meyer-dussack-article-v1-2-2014.pdf). It’s a great little 28-page guide that gives a good intro to Dussack and I’d highly recommend it.

The point of this post is that reading his quotations of Meyer’s descriptions of his Guards made me realize that it’s a good way to illustrate how the Wards of I.33 really are subtly different.

END_OF_DOCUMENT_TOKEN_TO_BE_REPLACED

Just a brief post after this past Saturday working with the Durchtritt from I.33 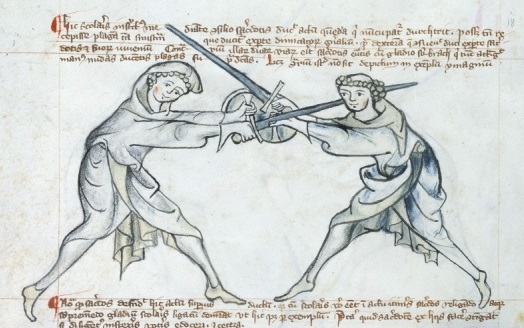 END_OF_DOCUMENT_TOKEN_TO_BE_REPLACED

The topic of Common Fencing is one of those recurring topics in HEMA. People have been trying to figure out exactly what the common fencing of the medieval and renaissance period looked like. This is probably due to the fact that most of the manuals we have are NOT “common” fencing but rather some sort of advanced system taught by a knight, or nobleman, or someone otherwise special, usually making hinting references to what techniques are “common”. In fact, many of the systems we have manuals for seem to be systems designed to beat the common fencing of the period.